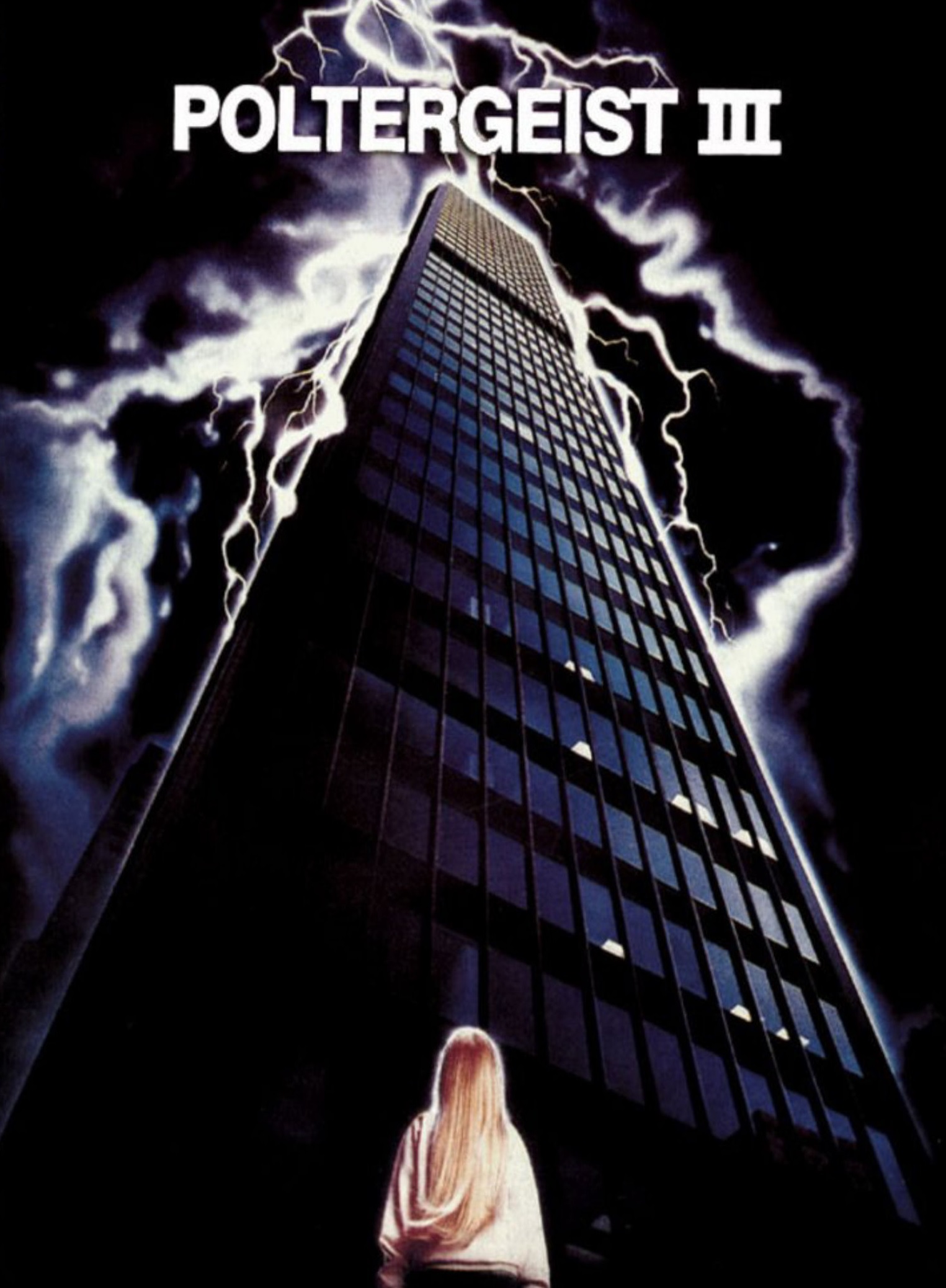 Though it’s by no means a great sequel, Poltergeist 2 had at least a few good things going for it. For one, it was co-written by the same guys who wrote the first film (minus, of course, the input of Steven Spielberg), and it also brought all of the surviving stars back. As a result, the first sequel at least felt like a continuation of the 1982 classic, which is more than can be said for the series’ third installment.

Released in 1988 and co-written/directed by Gary Sherman, Poltergeist 3 centers on young Carol Anne Freeling, now living away from her parents at her aunt’s apartment in Chicago. When Reverend Kane comes back onto the scene, determined once again to bring her onto the other side for his own sinister purposes, Carol Anne’s aunt (Nancy Allen) and her husband (Tom Skerritt) must fight to save her soul.

The most unique thing about Poltergeist 3 is the location, which completely subverts the suburban terror that the franchise had previously been all about. Aside from only one scene, the entirety of the film takes place in a high-rise apartment building in Chicago, which boasts its own shopping mall, grocery store and art gallery. It’s a world unto itself, and the locale gives the film a different sort of feel.

Kane’s portal to Earth, this time around, is through mirrors, and Sherman does a fantastic job of milking that concept for all it’s worth. In fact, the strongest suit of the entire film is the way he plays around with the apartment building’s many mirrors and the various reflections cast by other surfaces, and he pulls some pretty effective little moments out of the gimmick – in the early going, at least.

Alas, the constant obsession with mirrors wears pretty thin around the halfway mark, and once you’re no longer amused by Sherman’s funhouse tricks, there’s very little left to hold your attention. Like Poltergeist 2, there’s not much going on here in terms of story, and the film eventually devolves into characters running around and looking for the lost Carol Anne – while screaming her name.

According to IMDb, the name Carol Anne is spoken by characters a grand total of 121 times, and Roger Ebert famously criticized the film over that fact. There are moments where you’re almost sure that some sort of inside joke is being played on you, as it’s not uncommon for one character to repeat the name ten times within a single scene. Past a certain point, it becomes downright nauseating.

I didn’t count but I’m willing to bet that at least 70 of those 121 instances came courtesy of Zelda Rubinstein, who reprised the role of Tangina for Poltergeist 3. While Rubinstein was a perfect fit in the first Poltergeist, as the whole film has a zany quality to it that gels with her particular brand of acting, the same unfortunately cannot be said for either of the sequels – where she feels quite out of place.

That being said, there’s no denying that Tangina was a pivotal component of the franchise, and so it’s somewhat admirable that Sherman decided to brazenly kill her off. It’s hard to say exactly what happens but at some point her life force gets completely sucked out, and Tom Skerritt’s missing daughter (played by a young Lara Flynn Boyle) bursts out of Tangina’s tiny body. It’s kind of the best moment in the film.

The only other Poltergeist star who returned for part three was young Heather O’Rourke, who reprised the iconic role of Carol Anne Freeling. It’s never quite explained why her parents sent her off to Chicago, though it’s strongly suggested that they just didn’t want to deal with her anymore. It’s a pretty dark path for the franchise to head down, to be sure, and Sherman doesn’t shy away from heading down it.

Somewhat cast out of society due to the events of the previous films, Carol Anne goes to a school for “special kids” in Chicago, where an unsavory doctor picks up her case. The doctor, one of the most hateable characters in horror history, is convinced that Carol Anne is some sort of monster, believing that she has the ability to make others see fantastical things that aren’t really there.

And then there’s Diane Freeling’s sister, who eventually reveals to her husband that she’s on the side of the doctor. In so many words, she admits that she doesn’t quite love Carol Anne enough to want to save her from Kane, and this becomes a pivotal plot point when Kane uses that lack of love as a way to get in. It’s a nice touch because you really feel bad for Carol Anne, who of course has no control over her curse.

Speaking of which, the so-called ‘Poltergeist Curse’ impacted this film in a big way, as the actor who played Kane (Julian Beck) passed away prior to the completion of Poltergeist 2. A new actor was brought in to take over the role, with heavy makeup applied to make him look the way Beck naturally looked, and it’s just not the same – nor is Kane, this time around, even half as creepy as Beck was in the role.

But the alleged curse’s most tragic victim was of course Heather O’Rourke, who passed away shortly after the film was shot. The studio decided to reshoot a new ending in the wake of her death, and the result is a horribly rushed finale. Not only is the final battle anticlimactic but it’s also very unsatisfying, as Carol Anne is played by a stand-in for the last scene – and she’s intentionally hidden from view.

Ultimately, Poltergeist 3‘s obsession with mirrors and the nauseating repetition of character names make it a slightly amusing watch but a much better drinking game. Through revisiting the franchise this week, I can’t help but agree that the series does indeed have an evil spirit attached to it: an entity, it seems, that was hell-bent on ensuring that the franchise didn’t have a very long life.

Because as good as the original Poltergeist is, the franchise went down the crapper from the minute the very first sequel was made. This is one series that truly should’ve quit while it was ahead.