I think the strangest thing about lying there in her arms was how comfortable I was with the entire situation.

Hours before, the first sight of them had come. I’d been warned countless times of their existence, and given a plethora of methods to skirt their spells, yet despite all this, I never expected to come face to face with them. Hell, I hadn’t even expected them to be real. When I began this expedition through what were famed as infested waters, I doubted anything would happen to me.

It was Thomas that first heard one. He claimed to hear a woman calling softly to him. Of course, this was foolish. We weren’t daft enough to let a woman onboard. Yet he insisted she was there, making words he could barely comprehend. Even as we all fled to one side of the ship in hopes of catching a glimpse of this mystery woman, we found nothing but the gentle waves that lapped at the dark wood.

About an hour later, Tristan mentioned something similar. Apparently he’d been keeping it to himself, but this woman had been plaguing him for as long as she was singing to Thomas. The two of them were horribly sidetracked with their delusions of beautiful dames, and it was beginning to make the rest of the crew nervous. Even I found myself avoiding the edges of the ship, contemplating taking perch in the crow’s nest instead. 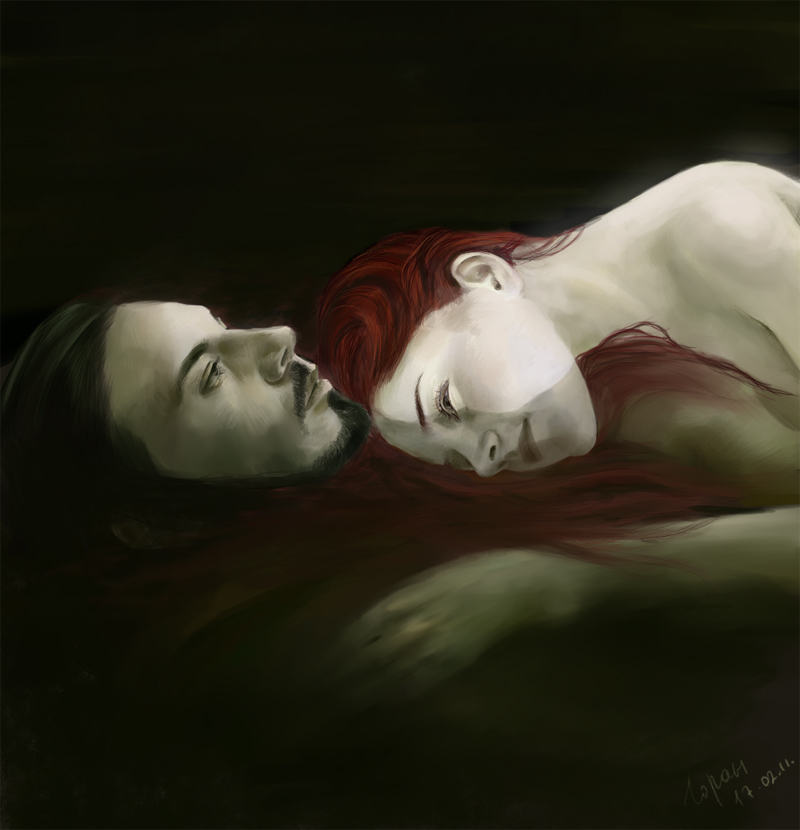 Moments after Tristan had brought up complaint, my time had arrived. Her voice was soft to begin with, barely a whisper in the distance. I struggled to push it from my mind, but like the insistent witch she was, the gentle singing continued to grow louder, permeating the forefront of my psyche like needles against my skin.

As the day progressed into evening, I found myself growing even more irate. I no longer wished for her incessant jeering. Her sweet words cut me like a knife, and her soothing song only proved to further infuriate me. Eventually, I’d found myself resigned to the barracks, desperately trying to block out her tune with the lull of sleep.

In the middle of the night, I awoke. However, I wasn’t in the barracks with the other crewmen. None of us seemed to be. Instead, I became distinctly aware that each one of us was on-deck, leaning precariously over the edge. Tristan stood to my left, and Thomas stood further away. Together we swayed with the waves and our ship, staring over the edge. It was an eerie chorus of men gazing into the depths below. And even as I peered into the darkness, I thought I saw shapes that didn’t resemble waves, but human beings.

How strange it felt to be bringing my foot onto the ship’s railing. I subconsciously reached for a rope nearby, using it to haul my weight onto the very edge. I stared over, barely able to keep my balance. Yet I was acutely aware of the fact that I did not wish to balance. I knew I shouldn’t, but every impulse told me to jump.

As my feet broke the barrier between wood and air, I felt myself hang suspended for but a moment. I again begun to ponder why, exactly, I was doing this, before it became glaringly obvious. As I plummeted toward the ocean beneath me, the women — now an indiscernible uproar of voices — grew louder, contributing to my addled, chaotic mind. I crashed through the water like a stone and surfaced again with hardly a gasp. The sounds of other stones dropping met my ears. Hands clawed at me from all sides, until finally, one of them wrapped her arms around me and clutched me in a cold embrace.

I felt the chill nibble at my fingers and toes first. It was so cold, I couldn’t breathe. Yet I felt a warmth in my heart, brimming fuller than I ever anticipated it could. She sung softly to me as she rested her head against my chest, and I felt the moon grow darker in my fading sights.

Her singing must have grown louder, but I was barely aware of it any more. I felt a certain peace wash over me in waves. Her embrace grew tighter as we begun to sink. As my mind begun to grow fuzzy and dim, I had only a brief moment of clarity, cut clean by a muffled plea, before I slipped into unconsciousness,