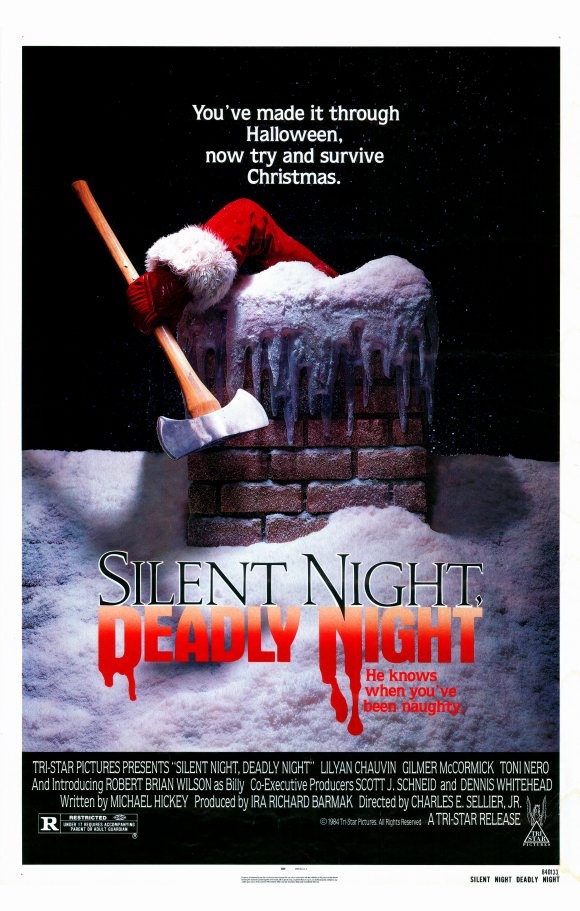 Over the weekend, news broke that the 1984 holiday horror flick Silent Night, Deadly Night is finally headed to Blu-ray, courtesy of a special 30th Anniversary release that’s set to hit retailers on September 16th of this year.

Though no details about the release have yet been revealed, the mere fact that the film is going to hit Blu-ray is cause for a whole lot of celebration, particularly by people like myself, who consider it to be one of the very best exports of the 80s slasher boom.

Since Silent Night, Deadly Night is a trending topic within the horror community at the moment, in the wake of the release announcement, I figured I’d take advantage by using this as a rare opportunity to talk about the film outside of the holiday season, and share some of my personal favorite moments from one of my personal favorites.

So here are five things I absolutely love about Silent Night, Deadly Night! 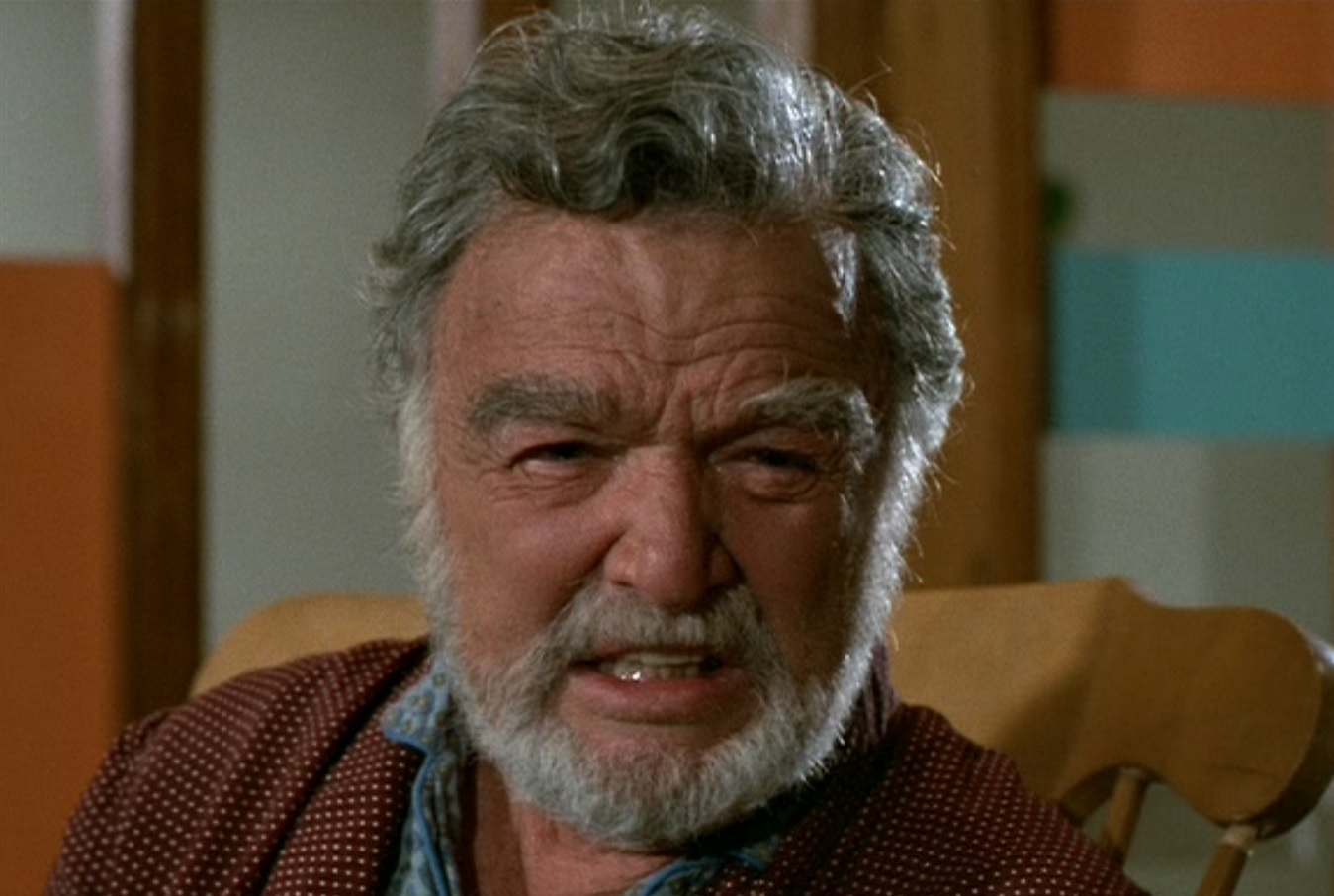 Silent Night, Deadly Night of course kicks off with a scene showing young Billy and his soon-to-be-dead parents visiting Billy’s grandpa at a mental facility, which is one of those opening sequences that just immediately makes you fall in love with the movie. In a catatonic state, at least when Billy’s parents are around, creepy grandpa suddenly springs to life when they leave the room, informing Billy that Christmas Eve is the ‘scariest damn night of the year,’ and that he’d better ‘run for his life,’ if he ever sees Santa Claus.

The late Will Hare’s performance as Grandpa Chapman is hands down the best bit of acting in the entire film, and the whole monologue is just so bizarre and deliciously sinister that it’s hard not to love it.

By the way, Hare can also be seen as Old Man Peabody in Back to the Future, and he was even the face of the 1980s computer game series The Chessmaster! 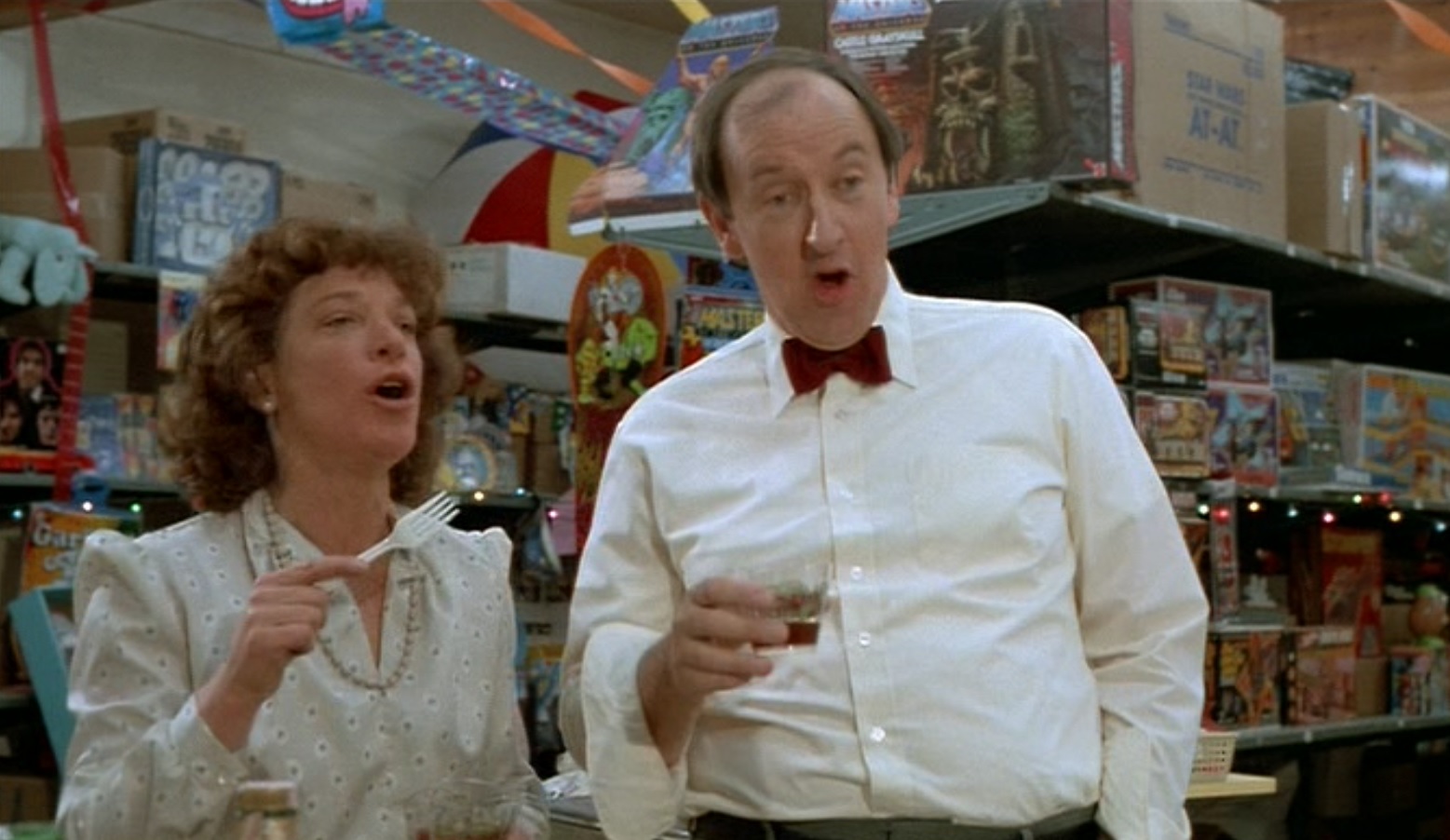 A good portion of Silent Night, Deadly Night takes place in the fictional toy store Ira’s Toys, named after producer Ira Barmak. This is the place where an adult Billy works and is eventually formed into a sadistic serial killer, when Ira asks him to play Santa Claus.

The scenes in Ira’s Toys are perhaps my favorite in the entire movie, because I absolutely love when 80s toy stores are captured and preserved on film. The shop is an absolute treasure trove of 80s awesomeness, jam packed with everything from vintage Halloween costumes to Star Wars and Masters of the Universe toys. Hell, a large part of the fun of the movie is just being able to virtually hang out in a toy store from a decade gone by.

I actually wrote up a whole frame-by-frame dissection of Ira’s Toys on my former blog Freddy In Space back in 2012, so check that out if you want to see everything that’s on display in the store!

3) THE ‘WARM SIDE OF THE DOOR’ MUSIC MONTAGE

There’s nothing quite as quintessentially 80s as the music montage, and Silent Night, Deadly Night has one of the best of all time. Right after Billy is hired at Ira’s Toys, we’re treated to an absolutely epic two-minute montage that serves as a quick way of summing up his first few days on the job.

In the montage, Billy helps kids reach toys on high shelves, clocks in and out of work, flirts with a female co-worker and turns down an offer of booze in favor of a carton of milk, all set to the tune of Morgan Ames’ ‘Warm Side of the Door.’ It’s precisely the sort of scene that sets Silent Night, Deadly Night apart from all other 80s slashers, and essentially comes off like a super corny local TV commercial for Ira’s Toys. At least, that’s what I like to pretend it is.

Also love the fact that Billy’s axe is visible on a wall in the background, throughout the montage, which sadistically hints at the fact that the happiness present in it will be very, very short lived. And indeed it is. 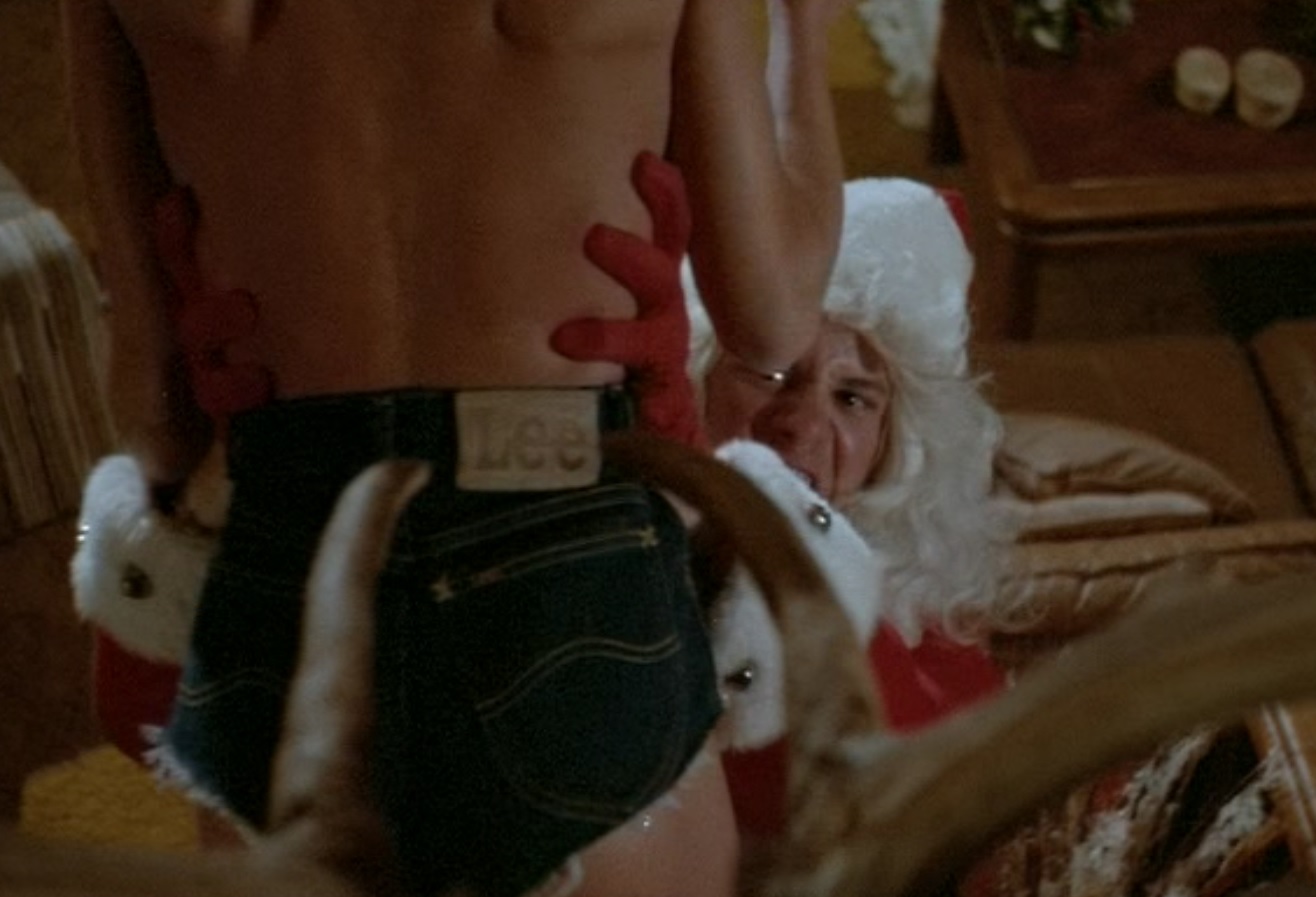 It’s basically impossible to talk about Silent Night, Deadly Night without talking about Linnea Quigley’s death scene, which is one of my favorite kills from the decade. The movie is packed with cool holiday-themed kills, from a Christmas light hanging to a sled-beheading, but none of them can match the scene where Billy turns a topless Quigley into a wall-mounted trophy.

A highly effective mix of camera trickery, smart editing and awesome practical effects combine to make the antler kill one of the absolute perfect examples of why all of us horror fans look back so fondly on 80s horror films, and the pre-CG death scenes they brought into our lives. Doesn’t get much better than this one. 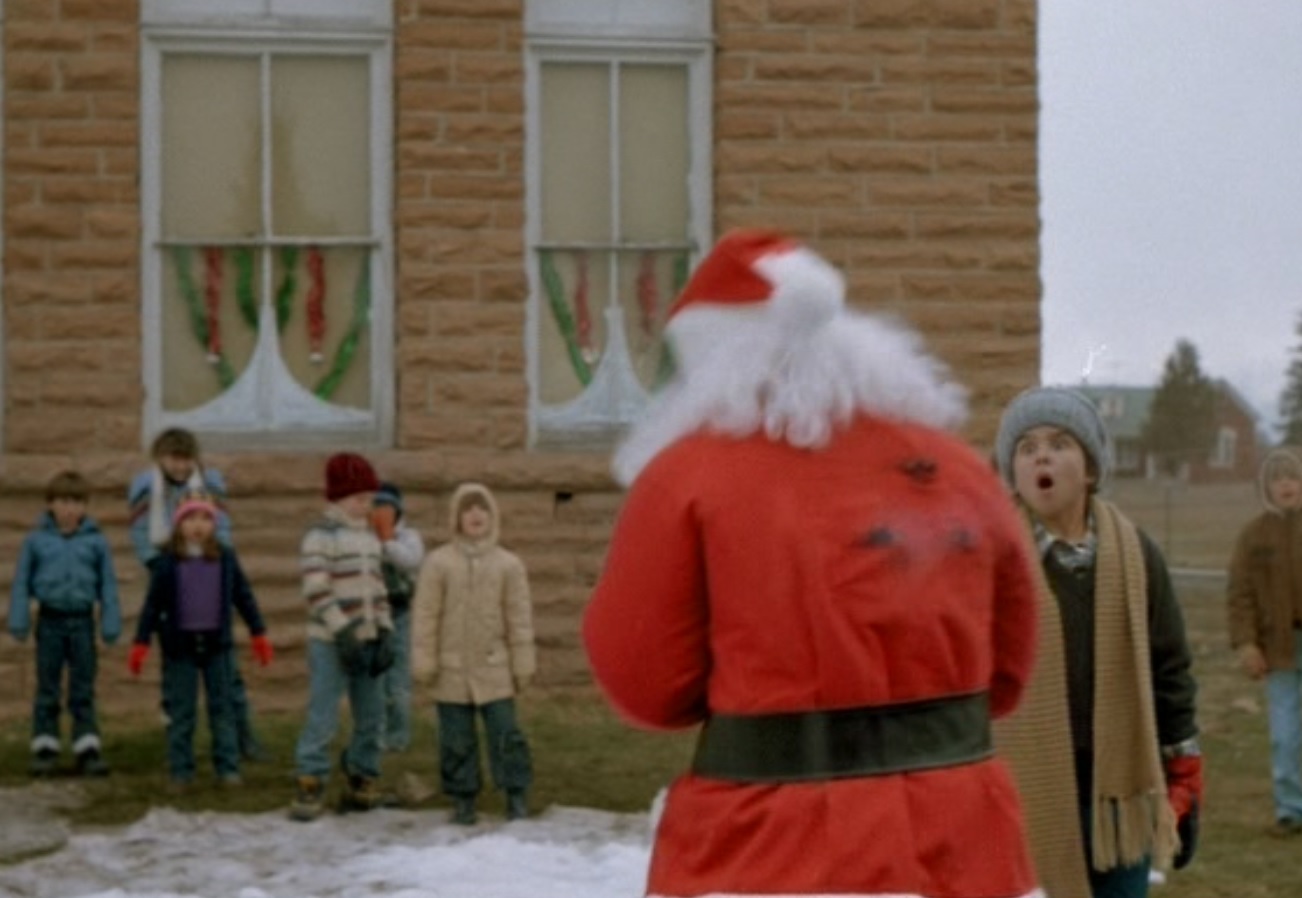 5) THE BALLSINESS OF IT ALL

One of the great things about Silent Night, Deadly Night is how taboo nearly every scene in the film is, pushing the boundaries of good taste at every turn. Not only does it feature TWO killers dressed as Santa but it also shows a police officer gunning down another Santa Claus, right in front of a group of children – just in case seeing Santa killing people wasn’t traumatic enough.

It’s not hard to see why so many parents and even critics were upset about the movie upon its original roll-out, famously picketing the release and leading to it being completely pulled from theaters. Of course, it’s the controversial nature of the film that makes it such a gem for folks like ourselves, and I just love how many fucks were simply not given by all involved.

They went for it. They went for all of it. And we should all be thankful for that. After all, horror is at its best when its pushing boundaries, and shattering taboos. Silent Night, Deadly Night does both of these things, as often as it possibly can.

What do you love about Silent Night, Deadly Night? Comment below and let us know!