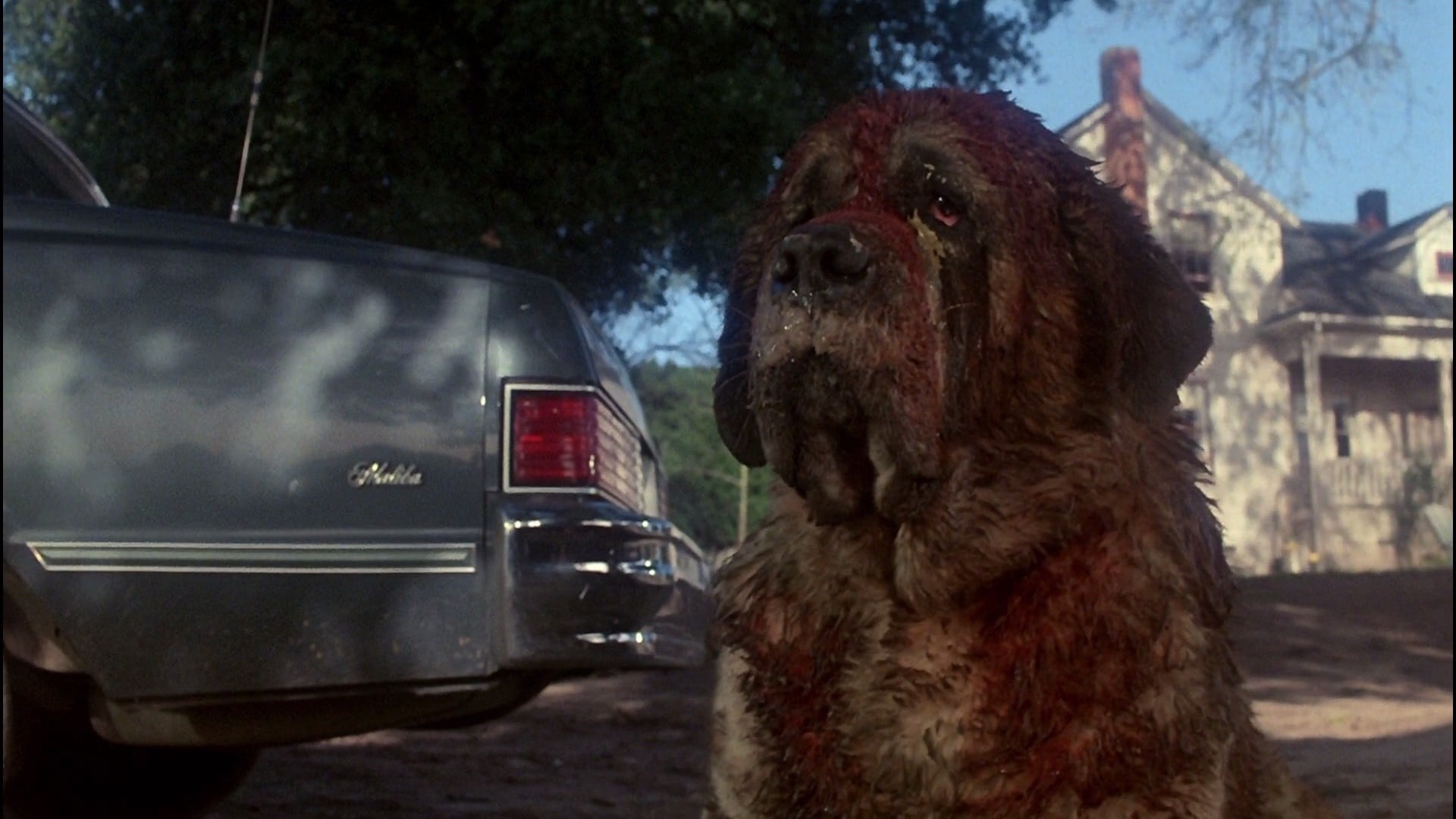 As a novel, Cujo works. There is some clutter to it, sure, but overall it keeps the tension ratcheted very high and has a satisfying end. For a story that is essentially about a woman and a child trapped in a car it sure packs a punch. Even the film did a fine job, getting a wonderfully gritty performance out of Dee Wallace, but if there is one place the book and the movie differ it is when it comes down to the title dog.

Stephen King’s novel had a few things happening all at once. A cereal ad that derailed; a wife having an affair; a car that was breaking down; and most importantly, it had Cujo. Cujo was a lumbering beast of a Saint Bernard who happened to get bit by a bat one summer day. From there it was all downhill for the dog as rabies and the summer sun and heat started to take their toll on his mental well-being.

Cujo, in the same form, existed in the film version of the book, too, but it was different. The dog was still huge and terrifying, and it still had rabies, but the film was not able to do the one thing the book did very well. It could not get the audience into Cujo’s head. In the book, we felt its pain. We knew why it was doing what it did. We could actually empathize with the creature. Not so in the film. In the movie, Cujo was a killing machine. Once he caught rabies he was a monster, and the collective audience lost any kind of tie it could have to him. This gives the same story told in different mediums two decidedly different feels.

The book is about the breakdown of the family in many different forms. The absent father; the cheating mother; the son trapped in it all, with his childhood being ripped away from him in the form of every child’s childhood friend, the dog. We have sympathy for it all, and that does not come from the fact that we have all been in the family’s situation in one way or another. It comes from the fact that we understand the dog and that it has no control over what it is doing. We get that life sometimes works that way, despite how we think things should turn out, and now we get to see why and how that is. It is a brilliant concept that is lacking in an otherwise fine film.

The movie version is a straight-ahead horror tale, much like Jaws. The situations are all the same, but this lack of insight into Cujo’s mind gives the movie an entirely different sensibility. Instead of being insiders to the situation, the audience is kept at a distance and forced to merely observe. It is a tense film, as we viewers put ourselves in the family’s situation, but that tension leaves once we leave the theater. The novel stays with you. In fact, I’ve read it twice since it came out in 1981 and it still sticks with me. The film? I remember watching it, and have watched it several times since, but it is a film like any other.

When someone tells you movies are better than books, remember the Cujo situation. They are two different mediums used to tell the same story using their own strengths. One is not inherently better than the other. Both are story delivery devices. What sets them apart is how the stories are told. In the realm of horror, one would be hard-pressed to find a better example of this than Cujo. If you have only experienced one, now is the time to delve into the other, and if you haven’t checked out either, change that. If you ever want to create horror in either written or cinematic form, the first step in doing so is learning what works … and Cujo is a fine place to start.