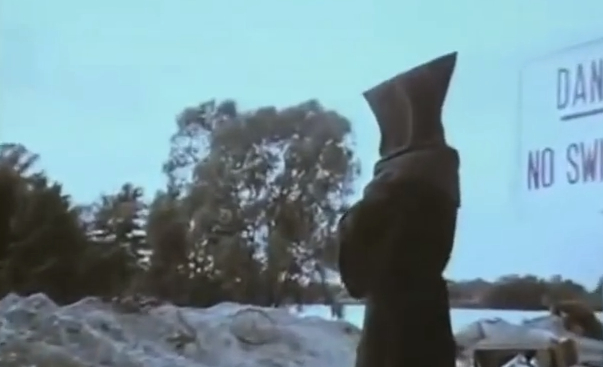 As I get older I find myself looking back to my childhood more and more … Occasionally I’ll suddenly remember something that my brain has stored away and a flood of memories will spill out, this piece is based on such a moment that happened just a few days ago.

I was scribbling down ideas for a few writing projects and my Girlfriend casually asked me if I recalled the old ‘Public Information Films’ or PIFs, (As I’ll call them from now on), which were used to keep British children safe during the 1970s and 80s by quite simply TERRIFYING them into good behaviour.

In my case our Primary School class would all sit at the ‘carpet corner’ of the classroom, a large TV and VCR would be wheeled in and a tape would be played featuring 4 or 5 of these short films. They would also be shown during breaks in children’s programming for maximum impact and to ensure the young target audience were seeing them.

What PIFs do best is BURN images onto your memory, images that last. They educate and protect children with uncompromising honesty.

“The general low-budget quality and the infamous static “crackle” before them gave them a Hammer Horror style aura. Some of them were quite terrifying and remained ingrained in the child’s psyche well into adulthood”

There are hundreds of examples I could talk about but I wanted to concentrate on a few of the PIFs that I personally vividly remember from classroom viewing sessions and TV. I watched them again today to get some screen grabs and honestly, they still send shivers down my 38 year old spine! 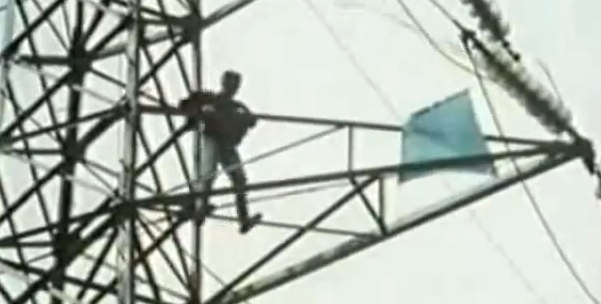 We start with a short film on the dangers of climbing an Electricity Pylon (Transmission tower). Some kids have been flying a kite which is now tangled on one of the pylons arms, an older boy who wants to “prove how tough he is” climbs the pylon, edges his way to end of the arm and reaches out for the kite not realising the electricity is passing through it … He is instantly enveloped in a shower of sparks and smoke. As the viewpoint returns to the base of the tower a message appears onscreen while the charred corpse of the boy plummets toward us, in slow motion! 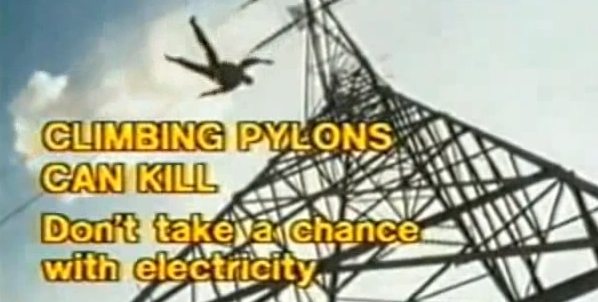 Next up is a depressing (but useful) film explaining what to do with dead bodies after a Nuclear attack!
It doesn’t come under the child safety focus of this article but I find it genuinely creepy that I actually remember watching this in my lifetime …

The very posh voice-over guy calmly explains that the bodies should be “Moved from your Fallout room” and wrapped in sheets, blankets, polythene or paper!!?? The body should then be carefully tagged with name and address details. 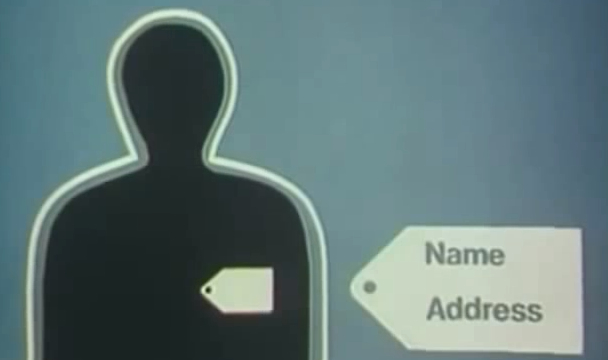 If more than five days pass and you are still living with the paper wrapped dead person the PIF instructs you to go outside and bury it in a “trench” … They even give you an amusing graphic to explain where ‘outside’ is, thanks to a big white arrow!

Now we come to the PIF I remember more than any other and is a flawless example of the gruesome lengths these films would go to in the name of safety. Its appropriately titled ‘Building Sites Bite‘ …

Basically, a well dressed young lad (Ronald) is put through a ‘Groundhog Day’ experience and repeatedly dies in accidents on a construction site. After each incident he is magically revived, asked about what he did wrong, what he learnt and then sent back to try and avoid making any further mistakes.

To begin with he follows his pet dog (Snoopy) to the bottom of a damp, unstable trench and within moments is buried alive … They cut to a shot of his dead hand protruding from the mud while Snoopy solemnly licks the finger tips. (Seriously, it IS as traumatising at it sounds!) 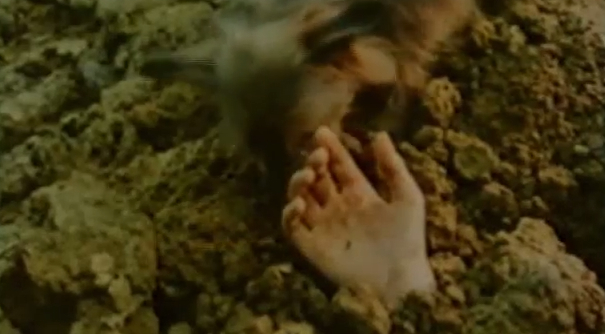 Next he chases the damn dog into a crumbling, derelict house, eventually reaching the top floor he stumbles and reaches out to grab the nearest thing he can see to steady himself … a live electricity cable. One loud bang later and we are treated to another hand-shot this time covered in deep flash burns, cut to shot of Snoopy outside … totally fine and whimpering.

Death number 3 is being crushed under the wheels of a giant Earth Mover, AGAIN after trying to retrieve the pesky dog … They resist the urge to show us his mangled body but instead they cut to a truly stomach churning shot of one of Ronald’s blood drenched, flattened shoes … That image stayed with me for YEARS after I saw it … (modern kids have probably needed therapy for less). 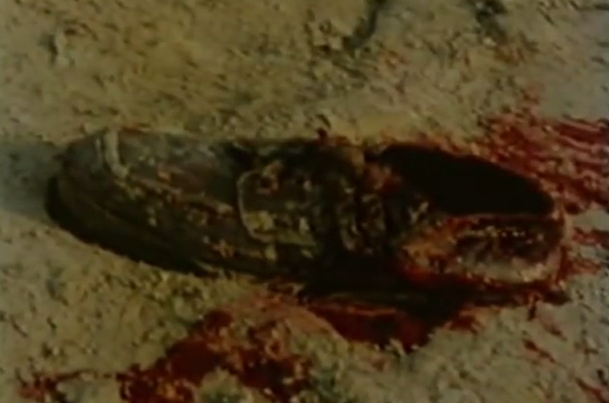 By this point you might think he would learn his lesson and just let Snoopy have fun surrounded by danger on his own? … Nope, he keeps following the mutt and keeps getting wasted. He slips off a large pipe and basically ‘scalps’ himself on some sheet metal fencing on the way down. YES, that is brain matter you get a brief look at!
Then he’s buried under about 500 clay bricks before finally drowning in an abandoned quarry. 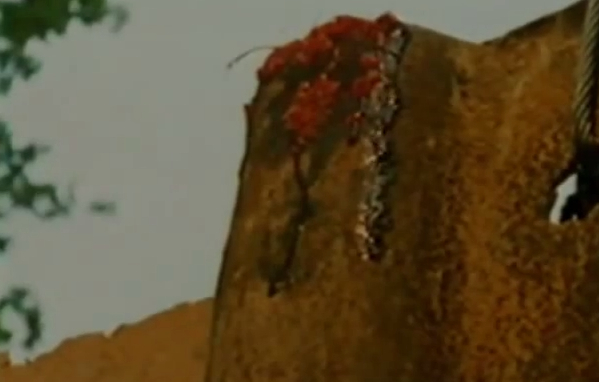 The whole thing was about 25 minutes long and I must have been about 7-8 years old when our teacher wheeled in the TV to play it. As disturbing as it sounds it worked on me 100%. I can honestly say as a young boy I never had the nerve to enter any kind of construction area or abandoned building simply because of this film and how it made me feel.

Finally I will leave you with a PIF that isn’t gruesome or gory, its just creepy … and to be honest, perfect. 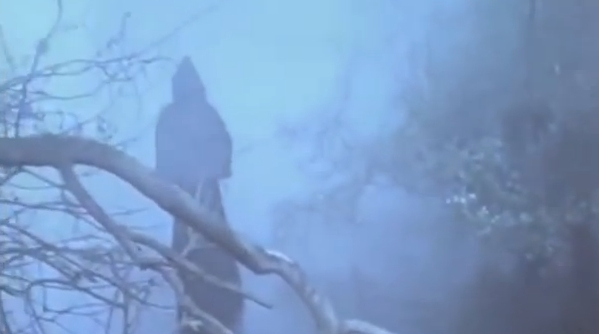 The film was titled ‘The Spirit Of Dark And Lonely Water‘ and is a drowning prevention PIF. In it a cloaked representation of ‘Death’ (Voiced by Donald Pleasence) is standing near a lake and provides narration throughout.

“The show offs are easy, but the unwary ones are easier still” is an early memorable line referring to the type of children Death knows he will be able to ‘claim’ …

“Sensible children … I have no power over them” is spoken at the end.

It’s a line that stayed with me and isn’t just valid to the dangers of drowning but encapsulates everything these short films were trying to say to kids, the message they wanted to ‘imprint’ on every single young mind …

They didn’t tip-toe around serious subjects, they told us the truth … and maybe most importantly, they SHOWED us the truth.