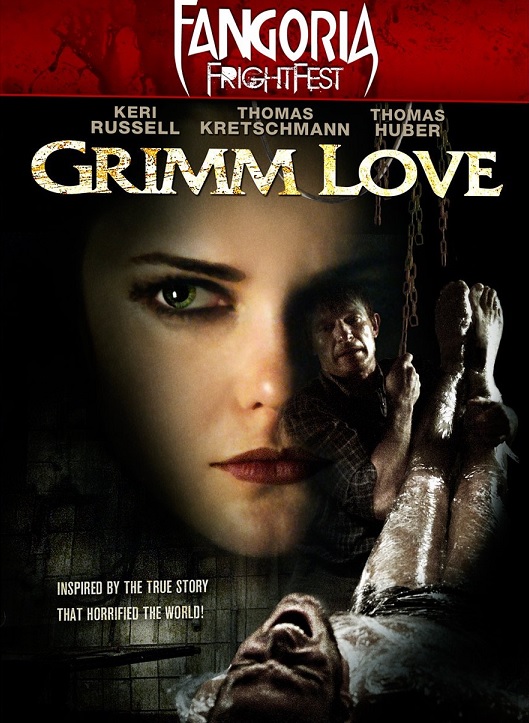 Though NBC normally premieres a new season of Hannibal in the first quarter of each year, we learned just a couple weeks back that those plans have changed for 2015, with Season 3 headed our way sometime this summer. In other words, the wait is going to be longer than anticipated, which is needless to say a bummer for all fans of the show.

If you simply can’t wait another six months for your fill of cannibal horrors, then boy do I have precisely the movie you simply need to watch, while you pine for the small screen return of cinema’s greatest man-eater…

Released onto DVD in 2010 by Fangoria’s FrightFest label, Grimm Love stars Keri Russell as psychology student Katie Armstrong, who is writing her thesis on German cannibal Oliver Hartwin. The man’s dream was to consume a willing victim, and he found precisely that victim in an online friend who longed to be eaten.

The film follows Katie’s obsessive investigation of the case, leading to the discovery of a chilling tape that documents the fateful encounter between Hartwin (Thomas Kretschmann) and his meal, Simon Grombeck (Thomas Huber). Naturally, it forever changes her view on life, love and everything else.

As many horror movies do, Grimm Love begins with a proclamation that the film is based on true events, and believe it or not, it was indeed ripped directly from the headlines. Though the names were changed, pretty much everything else about the film was entirely based on the facts of the utterly bizarre case, proving that the most horrifying stories are the ones that aren’t conjured up by writers.

In 2001, Arwin Meiwes began online correspondence with Armando Brandes, the two German men meeting on a fetish website called The Cannibal Cafe. Story goes that Meiwes posted an ad looking for someone to slaughter and consume, and it wasn’t long after Brandes responded that the two met up at the cannibal’s home, and got down to business.

After numbing Brandes on a near lethal cocktail of sleeping pills and alcohol, Meiwes cut off the man’s penis and the two attempted to eat it together, though the unsavory meal was accidentally burnt in a frying pan. Meiwes fed it to his dog and then read to his willing victim as he bled to death, eventually stabbing him in the throat and hanging his dead body on a meat hook. The entire thing, horrifyingly, was filmed and viewed by police – though it has never publicly surfaced.

For the next several months, Meiwes fed on Brandes’ body, allegedly consuming nearly 50 pounds of his flesh. It wasn’t until he posted an internet ad looking for another victim that Meiwes was caught, and he was sentenced to life in prison for the ‘murder’ of Brandes. Much like the fictional Hannibal Lecter, Meiwes reportedly went on to help German authorities catch other cannibal murderers, aiding them from behind prison bars.

While you probably wouldn’t expect a film starring Keri Russell to dig too deep into the case and really go for the jugular, Grimm Love is thoroughly unflinching in its portrayal of the true events, making it one of the most downright disturbing horror films to come out in the past decade. As a lifelong horror fan I’ve become desensitized to on-screen violence, to the point that few films genuinely unnerve me, but Grimm Love is a different sort of beast – the kind of film that will likely never fade from your memory, for as long as you live.

What makes Grimm Love so fascinating is that it has an unwavering respect for its characters, never exploiting their story but rather attempting to understand why those two men ended up doing what they did. A psychological case study, the majority of the film is comprised of flashback scenes that show the childhoods of both men, as well as the days leading up to their shared meal. What happened was disturbing, but WHY it happened is much more interesting – and Grimm Love understands that.

Though the word ‘love’ is likely not one that would come to mind if you read the Wikipedia account of the true story, Grimm Love is indeed a love story, albeit a twisted one. Like two pieces of a puzzle that were born and bred to fit together, the pairing of Mewes and Brandes was nothing if not a fateful one, and there’s something oddly beautiful about the connection their perversions allowed them to share. Theirs is about as far from a traditional love story as you can get, though it’s hard to call it anything but.

A horror film unlike any other, based on a true story unlike any other, Grimm Love is a trip into the deepest, darkest and loneliest recesses of the human mind, one that should only be undertaken by those with an open mind, a fascination with the macabre and a strong stomach. If you like your horror to be genuinely horrifying, and Hannibal is a show you consider to be a favorite, then this is one movie you ought to watch before the series returns to NBC.

If you thought the relationship between Hannibal Lecter and Will Graham was twisted, trust me when I say that you aint seen nothing yet!