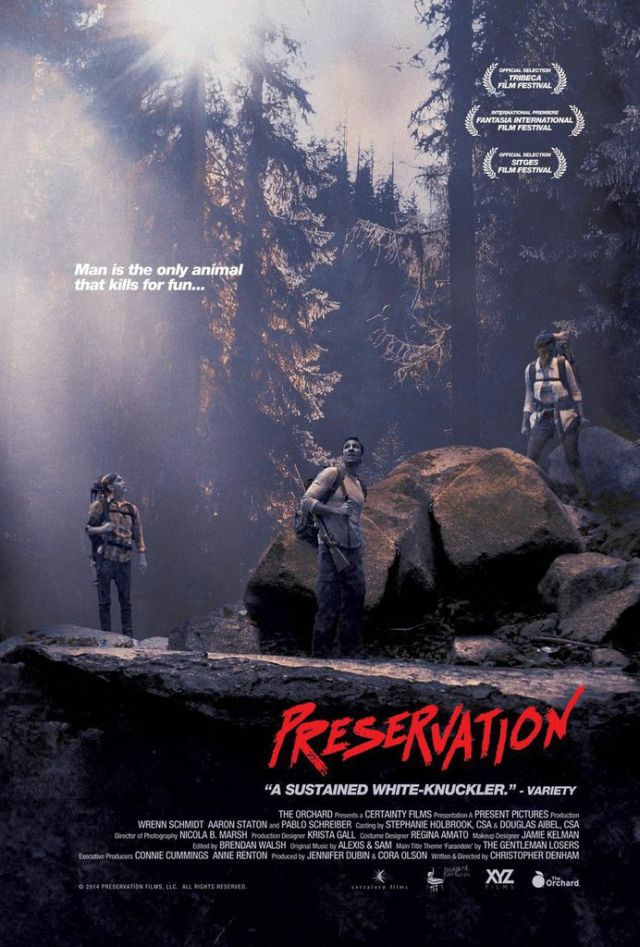 Before making The Woman in Black, James Watkins wrote and directed Eden Lake, which centered on a couple being terrorized by a band of evil kids while on a romantic getaway. Thoroughly disturbing, the British film made some powerful statements about humanity, resonating in such a way that the passage of time since first experiencing it has done little to erase the movie from my memory.

Written and directed by Christopher Denham, Preservation is cut from the same cloth as Eden Lake, or at least wants to believe that it is. In the film, presently available for instant streaming on Netflix, lovers Mike and Wit head out into the woods on a hunting trip with Mike’s recently discharged brother Sean, and they soon find themselves relentlessly pursued by a trio of masked killers.

Yes, this is one of those ‘the hunters become the hunted’ movies, and though the film thankfully doesn’t use that painfully generic tagline, it might as well have. Because almost everything on display in Preservation is nauseatingly derivative of horror movies from the past, whether Denham is directly aping from the aforementioned Eden Lake or trying to evoke the creepy spirit of The Strangers.

The problems are found almost exclusively within the script, which allows the fairly competent actors to do little more than go through the expected motions and play around within the cookie cutter. Sean is the PTSD-suffering war veteran while his brother Mike works in the big city and is attached to his phone. As for Wit, her eventual turn into badass heroine is so premeditated that you never see her as anything but.

Worse yet, none of the characters are in the least bit likable, to the point that I was initially almost certain the film was going to be a condemnation of them and their affinity for hunting. Both Mike and Sean are so disrespectful of mother nature that they almost feel like borderline villains in the early going, and the only possible reason to care about Wit is the cheap revelation that she’s pregnant.

And don’t even get me started on how little Wit makes sense as a character, as in one scene she says she’s vegan shortly before slicing a dead deer’s throat wide open. In fact, none of the characters ever seem to act true to the way they’ve been established – Sean’s ‘badass hunter’ skill set, for example, dissipates almost completely when he comes face-to-face with a bad guy.

While Preservation at first seems primed to make a statement about hunting for sport, which would’ve been a clever spin on the survival horror storyline, that all goes out the window almost as soon as the villains are introduced. It’s one of those movies that is frustrating to watch because there’s a potential depth to the proceedings right out the gate, though it remains entirely untapped within the script.

The film devolves into an endless series of tropes once the bad guys join in the hunting party, as our unlikable heroes make stupid decisions and you’re constantly made to feel like you’ve seen this movie before. The extent of the film’s storytelling lies in blink-and-you-miss-them moments in the early going that pay off later on, and when I say ‘pay off,’ I must admit that I’m being kinder than I should be.

Whereas Preservation overlooks the comparison between what the good guys are doing and what the bad guys are doing, it does at least attempt to make a statement about our society’s infatuation with guns and violence – but even that misses the mark. It’s not that it’s not clear what Denham is trying to say, as his intentions are very much on the nose, but rather it’s more that what he’s trying to say completely fails to resonate.

In the end, the unavoidable comparison between Preservation and Eden Lake does nothing but hurt Denham’s attempt to make a pseudo American remake, as his effort fails to make you feel even an ounce of what Watkins’ far more effective debut effort did. Holding the two films next to one another, Preservation ultimately seems like an even worse movie than it admittedly is.