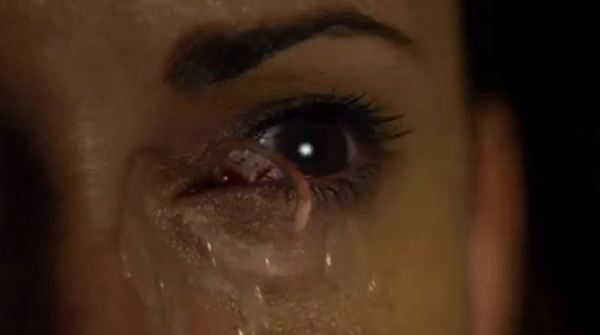 I’ve been pleasantly surprised by the evolution of The Strain in the past few weeks, the show starting out as little more than a whacky good time and unexpectedly transitioning into what I can’t help but refer to as the vampire version of The Walking Dead.

Whereas it was once the monster action that drew me to my television set every Sunday night, I’ve really come to care about the characters over the course of these ten episodes, which is honestly not something I expected to ever come on here and type.

With only three subsequent episodes to go, last night’s ‘Loved Ones’ played up that character drama in a big way, mostly focusing on a story that was set up in the previous episode: Ephraim’s estranged wife Kelly is missing, and he has vowed – both to himself and his son Zack – to find her.

The episode started with Zack swiping a laptop from Setrakian’s pawn shop and using it to locate his mom’s cell phone signal, determining that the phone was active and on the move. Of course, it’s already been established that the internet has been totally knocked down, thereby preventing one from doing such a thing, but we’ll just have to look past that.

Holding onto some hope that the active phone means that his ex-wife is still alive, Eph left the safety of the pawn shop and headed out into the mean streets of New York City, providing us with a nice look at what’s going on out there. Though it’s daytime, with no vampires in sight, looters fill the streets and anarchy rules, and it was nice to get a glimpse of that apocalyptic madness.

It wasn’t long before Eph located his wife’s pink-cased smart phone, in the possession of a homeless woman with a nasty burn on her leg. In exchange for wrapping the wound, the woman took Eph to the location where she found the phone – right next to his wife’s abandoned car. Inside the car was a bloody tissue, and all signs pointed to Kelly being in a whole lot of trouble.

Throughout the remainder of the episode we were treated to a handful of flashback sequences, showing us exactly what happened to Kelly. Coming home from the school she teaches at 32 hours prior to the episode’s events, Kelly was attacked by her boyfriend Matt, narrowly escaping with her life when she cleverly used a blender blade to slice up his face.

Well, I guess you could say she didn’t escape with her life, because one of those nasty worms invaded her eyeball in the process, recreating the imagery from the show’s controversial billboard advertisement. As gross as the promo art was, actually watching it happen was even more cringe-inducing, the gross-out scene serving as a catalyst for the best look at the vampire transformation process we’ve yet seen.

Though we’ve of course seen several people turn from human to vampire, Kelly’s transformation was slow, painful and drawn out, for the first time making you feel what that process is like. With worms coursing through her body, Kelly began internally developing one of those blood-sucking tongues and was holding on to any semblance of her humanity, desperately searching for Zack.

Though her search initially took her to Zack’s school, she next headed over to her friend Diane’s house, where she attacked Diane’s young son and then completely drained Diane. Following the voice in her head, Kelly headed into NYC’s subway tunnels and met up with The Master, who told her to “embrace her glorious fate.”

Hot on her tail, Eph eventually ended up at Diane’s house, discovering both her and her son in a chilling Night of the Living Dead-esque basement scene. Lying together on the floor, it was quite clear that both had become vampires, and Eph had no choice but to shoot both of them dead, in what was a fairly gut-wrenching and shocking scene.

After killing mother and son, Eph saw a piece of Kelly’s jewelry in Diane’s hand, leading him to make the assumption that it was her who attacked them. Returning to the pawn shop, Eph explained to Zack that he hadn’t yet found his mother but did manage to locate her phone, handing it over and allowing him to relive the memories preserved on it.

Scrolling through images, Zack came across a home video that showed him receiving a new bike for his birthday, filmed by his mother. It was the first time in the show’s history that I actually shed a handful of tears, proving that the show is indeed doing something right in the drama department. I had previously not been emotionally invested in Eph’s family, so it was nice to see that I actually cared, when all this went down.

Elsewhere, Vasiliy and hacker Dutch hatched a plan to invade Eldritch Palmer’s office and reverse the damage that had been done to the internet, Fet ensuring that he planned on killing Palmer in the process. After sweet-talking their way past Stoneheart’s security, Vasiliy and Dutch found themselves held hostage by men in suits, who stole their guns and put a stop to their plan.

After a quick chat between Palmer and Dutch, wherein he essentially told her she’s a worthless nobody and she responded by punching him in his pruney face, Palmer ordered his right-hand man to kill both Vasiliy and Dutch, intent on never seeing or hearing from them again.

Though it looked as if they were going to carry out Palmer’s orders, the men let Vasiliy and Dutch go, telling them that they’re not on board with what Palmer is doing. The scenes with the two characters ultimately went nowhere, but they revealed some cracks in Palmer’s armor and set up the budding relationship between Vasiliy and Dutch, which should be interesting to watch play out.

Full of genuine drama and providing us with a sort-of inside look at the horrifying transformation process, ‘Loved Ones’ was a solid episode all around, adequately killing time before Setrakian’s ‘kill the Master’ plan is finally set into motion. And by the looks of next week’s preview, those wheels begin turning this coming Sunday night.

Here’s to hoping badass vampire dude Quinlan shows up again in Episode 11, a character that hasn’t been seen since he and his men made a big debut impression a few weeks back. I miss him already, which says a lot considering the fact that we’ve seen so little of him!