Mystery boxes have become big business in recent years, and the horror community has no shortage of its own. Services like Dread Central’s Box of Dread, Rotten Rentals, and Horror Block deliver monthly treats to the doorsteps of horror fans across the country, and their success is sure to pave the way for more boxes of horrific mystery. In fact, a new one launched this month, just in time for Halloween.

Unlike other services, HorrorPack ditches fun little trinkets in favor of actual horror movies, and subscribers are offered the option of receiving either four DVDs or four Blu-rays each month. The DVD plan starts at $19.99/month while the upgraded Blu-ray option will cost you a bit more at $24.99, and as you increase the amount of months you sign up for, that monthly price decreases considerably.

This month’s HorrorPack is the brand new service’s inaugural outing, and in an effort to determine whether or not horror fans should invest their money in it, I had one of the DVD boxes sent to my doorstep. It arrived over the weekend, and today I invite you to come along with me as I crack it open and exhume the contents. Should you add HorrorPack to your monthly credit card bill? Let’s find out!

The first thing I noticed upon opening up the very first HorrorPack is that there is no literature of any sort included with the DVDs, making for a presentation that doesn’t do much to distance itself from a typical Amazon order. Something simple like a letter from the curators, explaining why each title was picked, would go a long way in giving the box some personality, but I suppose that’s a minor gripe.

The HorrorPack, after all, is about the movies themselves… 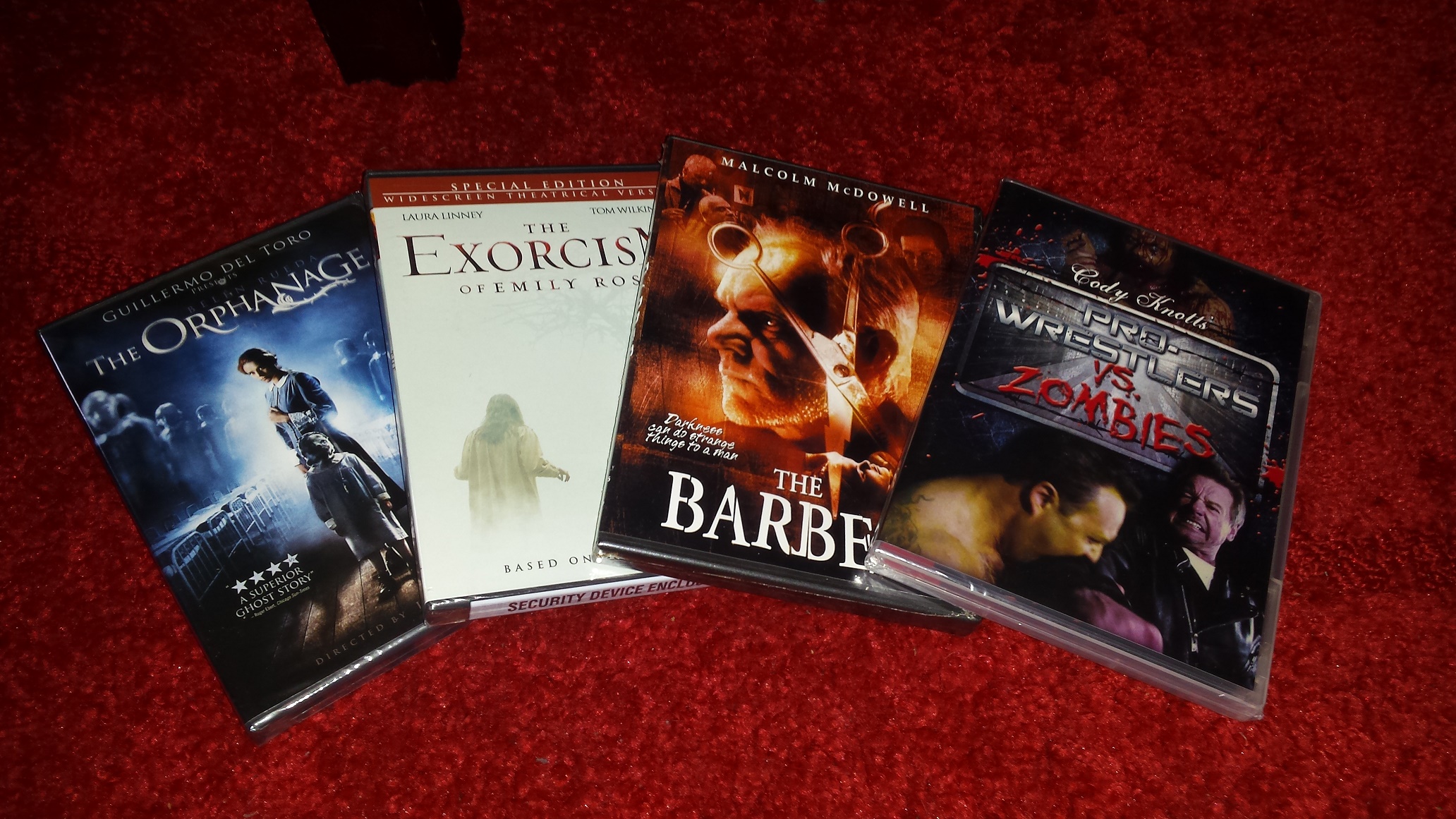 First up we’ve got the Guillermo del Toro-produced 2007 film The Orphanage, which is one of my favorite horror movies of the past decade. Somehow, I managed to go all these years without adding it to my collection, so it was a real treat to see this one in here. The Spanish gem is so much more than your average ghost story, putting a brilliant twist on expectations and making for unforgettable cinema.

Up next is Scott Derrickson’s 2005 film The Exorcism of Emily Rose, based on the real-life story of Anneliese Michel. Countless exorcism movies have come in the wake of The Exorcist, but none are as frightening and well executed as this one. Jennifer Carpenter is fantastic and the script is incredibly smart, centering on a court case to determine whether or not Emily Rose truly was possessed.

As happy as I am to see HorrorPack putting The Exorcism of Emily Rose into the collections of horror fans, I’ve already got this one in my own, and unfortunately the version they’re sending out is the theatrical cut – the unrated version, which I own, runs a few minutes longer. It’s a bummer to receive movies you already own, but it’s an unavoidable issue, and duplicates can always be gifted to friends.

Another title in this month’s HorrorPack that I already own is The Barber, released in 2002 and starring Malcolm McDowell as a murderous barber. It’s admittedly been many years since I’ve seen this one, so I can’t really say anything about it, but I do recall it being a lot better than most of the movies McDowell tends to appear in these days. Will have to revisit this one, and again will be gifting this disc to a friend.

Rounding out the October HorrorPack is 2014’s Pro Wrestlers vs. Zombies, the most recent film in the box and one I don’t own and haven’t yet seen. A handful of pro wrestlers, including the late Roddy Piper, star in the horror-comedy, and as a huge fan of both wrestling and zombies, I’ve been meaning to check this one out. Coolest of all, this is the two-disc set, which includes the soundtrack and is out of print.

All things considered, I’m pretty happy with the HorrorPack’s first four offerings, and it’s great to see a wide range of different films inside the box. The Orphanage and The Exorcism of Emily Rose are critically acclaimed hits while The Barber is a movie most fans likely haven’t seen, and the addition of Pro Wrestlers vs. Zombies seems to indicate that relatively new releases will be finding their way into the rotation.

From what I gather, everyone gets the same four DVDs/Blu-rays each month, though the four movies sent out as part of the Blu-ray deal are completely different than the ones sent out to DVD subscribers. This way you can subscribe to both, and receive eight different titles each month. It must also be noted that shipping is free of charge inside the US, so you’re not paying a penny more than the listed cost.

When you sign up for the DVD pack, for example, you’re paying just $19.99 for one month – and again, the cost goes down when you subscribe for more than a single month – so it works out to a mere $5 per disc. Even when purchasing used DVD copies off Amazon, shipping costs typically bring the total to around that much, and since these are new and sealed, $5 per movie is about as low as DVD prices get.

Going forward, HorrorPack is looking to partner with independent filmmakers and distribution companies like Dark Sky, Scream Factory, and Wild Eye Releasing to make their service an offer that simply can’t be refused, and they promise to stay away from discount bin titles and movies that are currently available for free streaming. If they live up to those promises, the future of this one is looking bright.

In a world of instant streaming, it’s great to see a mystery box service dedicated to physical copies of horror films. If you like the sound of that, head over to HorrorPack.com to sign up today!