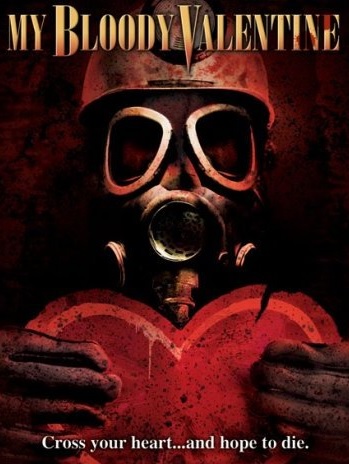 There were very few fan-favorite slasher films that came out in the 1980s that weren’t honored with at least one sequel, which is why it’s pretty surprising that one of the best slasher exports of the era was never followed up with one.

I’m of course talking about 1981’s My Bloody Valentine, a Canadian production that hit all the right marks, but nevertheless failed to win big at the box office.

That said, there were at one point in time plans for a sequel, which we’ll get into in just a second. But first, some quick thoughts on My Bloody Valentine.

A clear attempt to capitalize on the smash hit success of Friday the 13th, which was released one year prior, My Bloody Valentine is one of the true gems of the slasher movement, pick-axing its way into theaters at the height of the 80s slasher craze.

The appeal of slasher flicks, to me at least, is that they’re simple, fun and easy to digest, and there are really only three pieces of criteria they need to meet, in order to come out smelling like a bouquet of blood-covered roses:

When it comes to My Bloody Valentine, big ole checks can be found in all three of those boxes. From a small town’s creepy mine, which gives the latter portions of the film an almost Alien-esque vibe, to an equally creepy villain, clad in a gas mask, the film fires on all the necessary slasher cylinders, and it’s jam packed with gore that’s both gleefully over the top and quite inventive.

Well, the unrated cut is, at least.

One of the most noteworthy things about My Bloody Valentine is that the MPAA hacked it up as much as Harry Warden hacks up teenage lovers, forcing the filmmakers to excise much of the film’s gore, in order for it to see a widespread theatrical release. The MPAA handed the original cut of the film the dreaded ‘X’ rating, and since a film will never see the light of day with such a rating attached to it, they had no choice but to cut it down until it met the standards for the more palatable ‘R’ rating. So goes it, in Hollywood.

Thankfully for us horror fiends, Lionsgate released the film on Special Edition DVD & Blu-ray back in 2009, finally allowing fans to experience the film as it was originally meant to be seen. And boy does it make a difference. Put back into the film is nearly three minutes of bloodshed and gruesome carnage, and if you’ve seen the film but haven’t yet seen the unrated cut, I absolutely implore you to do so, this Valentine’s Day. You truly haven’t seen the movie, until you’ve seen the unrated cut.

My Bloody Valentine ends with the revelation that Axel Palmer has been ‘Harry Warden’ all along, which leaves T.J. Hanniger and ex-girlfriend Sarah to go off into the sunset together. As is typical with most 80s slashers, the film is left on a big time cliffhanger, as we find out that Axel is still very much alive, and his reign of terror far from over.

Due to the poor box office take of the film, which made back its budget but came nowhere near the numbers of Friday the 13th, we never did get to find out what became of T.J., Sarah and Axel, and now that a remake was released in 2009, it’s likely that we never will. But if the original film’s director had his way, the story would’ve continued around a decade ago…

Though director George Mihalka was for many years not interested in making a My Bloody Valentine sequel, he and producer John Dunning got together and formulated a plan to do just that, a few years before the film found itself on the remake chopping block. Dunning was again going to produce, with Mahalka returning to the director’s chair, to tell the continuing story of T.J. and Sarah.

As he revealed in an interview conducted with The Terror Trap at the time, the plan was to reunite as many of the original cast members as possible for the tentatively titled The Return of the Miner, which would pick up the story in the present day. Sarah is now the sheriff of Valentine Bluffs, according the screenplay, and she’s married to T.J., who she has a few sons with.

Disobeying Harry Warden’s orders, the small town was to have turned itself into a profitable tourist attraction, with the old mine becoming a carnival-style thrill ride – complete with a concession stand full of things like toy pick-axes, t-shirts and miner helmets. T.J. and Sarah are of course not happy about that, and presumably the killings would soon begin again.

That’s all we’ve ever really heard about the project over the years, which eventually found itself in development hell.

As far as a sequel to the remake goes, only time will tell if that ever gets off the ground. It did well enough in theaters and on home video to warrant one, so let’s hope Lionsgate gets off their asses and brings the miner back for another dose of bloody Valentine’s Day carnage!