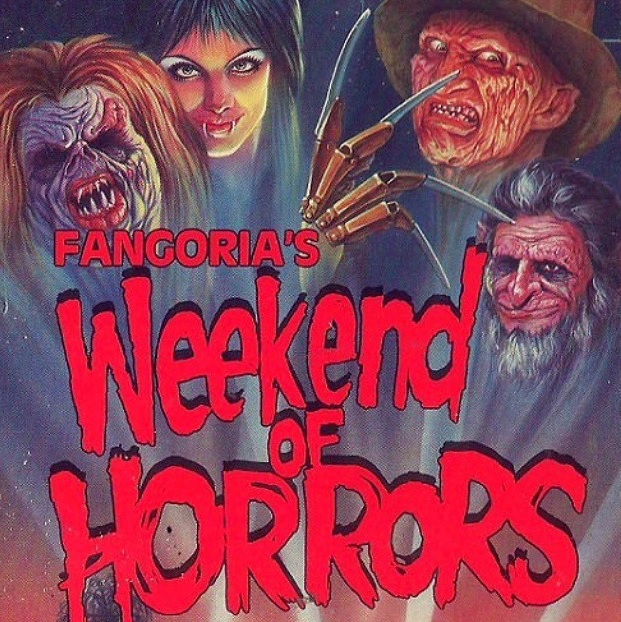 Back in 1986, Media Home Entertainment released a documentary about that year’s Fangoria Weekend of Horrors event, which hit VHS and never (officially) made the transition to DVD. Running an hour long, the tape included footage shot on the convention floor, clips from horror movies, and interviews with various stars, and it’s a must-watch time capsule that perfectly captures horror fandom in the 80s.

But the most interesting thing about the documentary, watching it back in the present day, is just how little has changed on the horror convention scene. If it weren’t for the grainy quality of the footage and the fact that all of the stars look a whole lot younger than they do now, it would be hard to tell what decade the doc was shot in, as the 1986 con looks much the same as the ones taking place today.

And there’s something beautiful about that, as it just goes to show how dedicated horror fans are to the movies they love. The shirts and costumes worn back in 1986 aren’t all that different from the ones you see on convention floors here in 2015, and it’s hard not to smile wide when you realize that fans are as eager to meet guys like Robert Englund today, 30 years later, as they were when the doc was shot.

At the same time, however, I can’t help but feel that the 1986 Fangoria’s Weekend of Horrors documentary holds a microscope up to one of the horror genre’s biggest issues: the inability for both the genre, and us fans in particular, to move past the past and embrace the present/future. The horror convention scene, perhaps more than anything else, illuminates that problem year after year.

I’ve personally been attending horror conventions for a decade now and I’ve seen very little evolution on the scene, most notably when it comes to guest lists. Almost every convention I’ve been to, and every one I’ve come across online, has shared many of the same celebrity guests, with guys like Bill Moseley, Kane Hodder, Robert Englund, and Doug Bradley representing the so-called usual suspects.

Now don’t get me wrong, I think those guys should be honored at every convention across the country due to their vast and enduring contributions to the genre, but one thing I rarely see on the scene are the new stars of horror movies released within the last five or ten years. There’s no shortage of beloved horror films that have come out in recent years, so where are all the fresh faces in the autograph rooms?

The answer to that question, unfortunately, probably has more to do with us fans than the convention promoters themselves. Aside from the stars of mega popular shows like The Walking Dead, most fans seem to have little interest in meeting the relevant horror icons of today, so it’s really a case of supply and demand. And that’s a bummer, because it means it is us fans who are refusing to evolve.

I can’t help but wonder what the horror convention scene will look like another 30 years from now, when most of the stars from our favorite 1980s horror movies are no longer with us. Will that be when actors from the movies of today start being integrated into the scene, or will the lack of nostalgia-inducing stars simply be the end of horror cons altogether? Somewhat of a scary thought, isn’t it?

I worry that the latter will be the case, as it’s not exactly like we’re allowing for new horror icons to be created. They’re certainly out there, from final girls like It Follows‘ Maika Monroe to villains such as Jill Larson from The Taking of Deborah Logan, but if we’re not establishing them as icons by incorporating them into conventions, then we’re simply not allowing for the genre to move forward.

I realize this post may read like I have a negative outlook on horror fandom, and though that may to an extent be the case, the simple fact of the matter is that I wish to see the genre evolve with each passing year. And horror cons are a big part of the genre as a whole, so big in fact that I believe they have the power to help move things along and ensure that future generations will have icons to look up to.

I’m not saying we need to replace the old icons on the horror convention scene, but rather that it would be nice if we started bringing in some of the newer ones to sit next to the greats and help elevate their notoriety in the community. If you agree, drop a comment below and let us know which stars from horror movies released in the last five-ten years you’d love to meet at a horror convention!