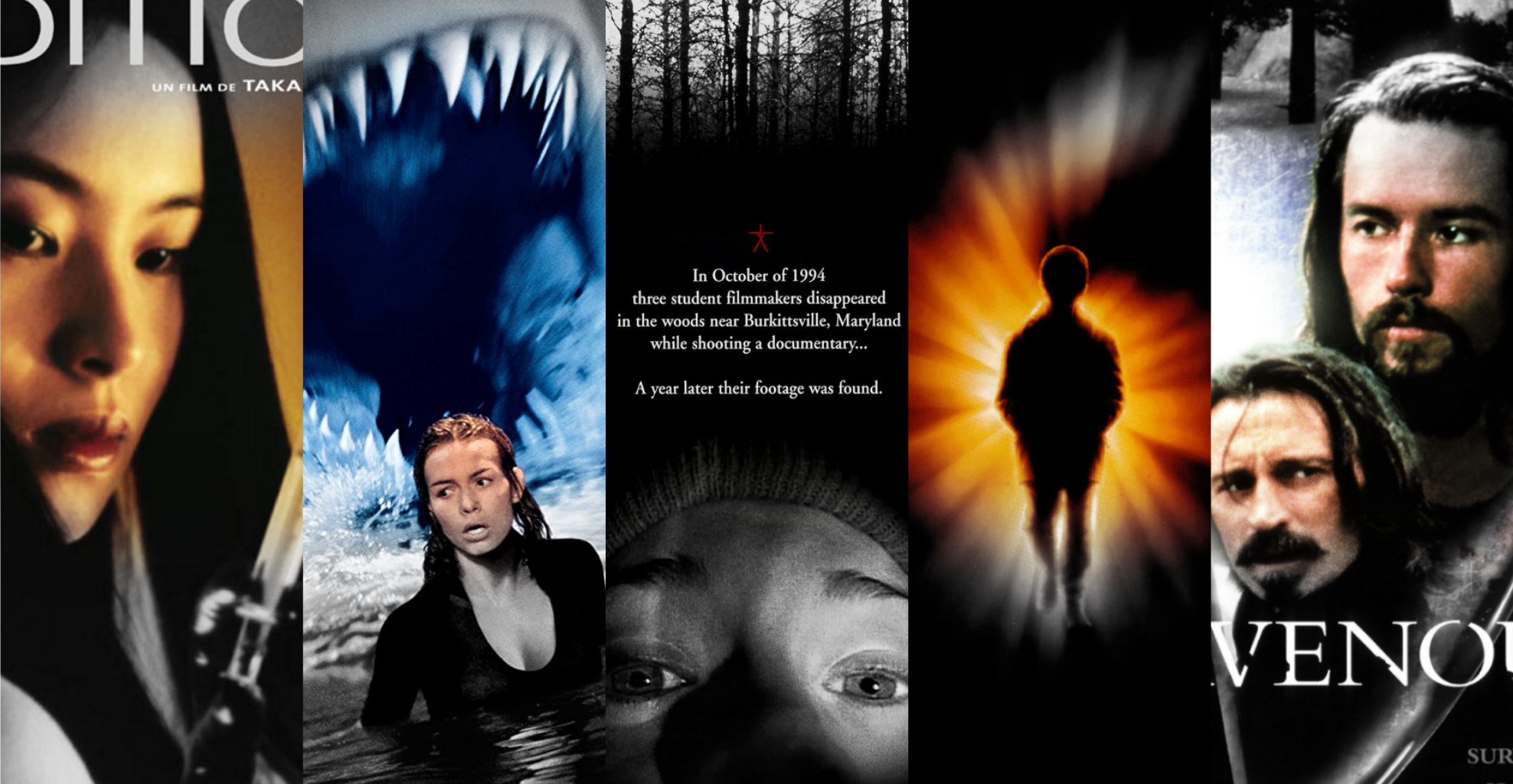 Renny Harlin hasn’t done much in recent years, but during the 80s and 90s he was the MAN if you wanted a money-making movie delivered with minimum fuss. He’s no Spielberg, but the dude knows how to churn out a big dumb blockbuster, and Deep Blue Sea is a perfect example of that. My friends and I had a FANTASTIC time watching this in the cinema, and Samuel L. Jackson’s death scene is a legendary jump scare.

What’s left to say about this found footage phenomenon? I honestly don’t think we’ll ever see another release quite like it. A film that genuinely confused the general public for far longer than would be possible these days, and got everybody talking and interested in going to the cinema. When I went to see it on opening night I witnessed three people get up and leave during the performance, simply because they couldn’t handle the tension created by how ‘real’ it looked. THAT’S good horror. I can’t say I’m deeply passionate about The Blair Witch Project, but I really admired it back then, and still do all these years later.

After discovering Ringu toward the end of 2000, I started to explore Japanese horror in more depth, and one of the most memorable films I came across was Audition. It isn’t supernatural, which was a pleasant surprise, and like all good J-horror it was unnerving, creepy, and at times pleasingly uncomfortable to watch. Torture in horror movies is overused these days, but Audition made characters suffer in style.

When I think about the first time I watched The Sixth Sense, it’s the little moments of spine-tingling fear that I remember the most. Those brief glimpses of the ghosts that followed Cole Sear were SO subtle, but they all helped create the quiet tension and grim atmosphere this film was so good at maintaining across the story. It was always going to lose some of its magic once everyone was aware of the twist ending, but Shyamalan’s first and biggest success remains a damn fine movie.

A seriously weird and wonderful adventure full of cannibalism and folklore. If someone asked me to describe the tone and style of Ravenous I honestly wouldn’t know where to begin! It was SO unlike anything I had seen up to that point, and seemed to enjoy playing with the viewers expectations while still managing to stay coherent and entertaining. The final battle between Guy Pearce and Robert Carlyle is hilariously brutal, and special mention must go to the fantastic score by Michael Nyman and Damon Albarn. Anyone else hungry now??