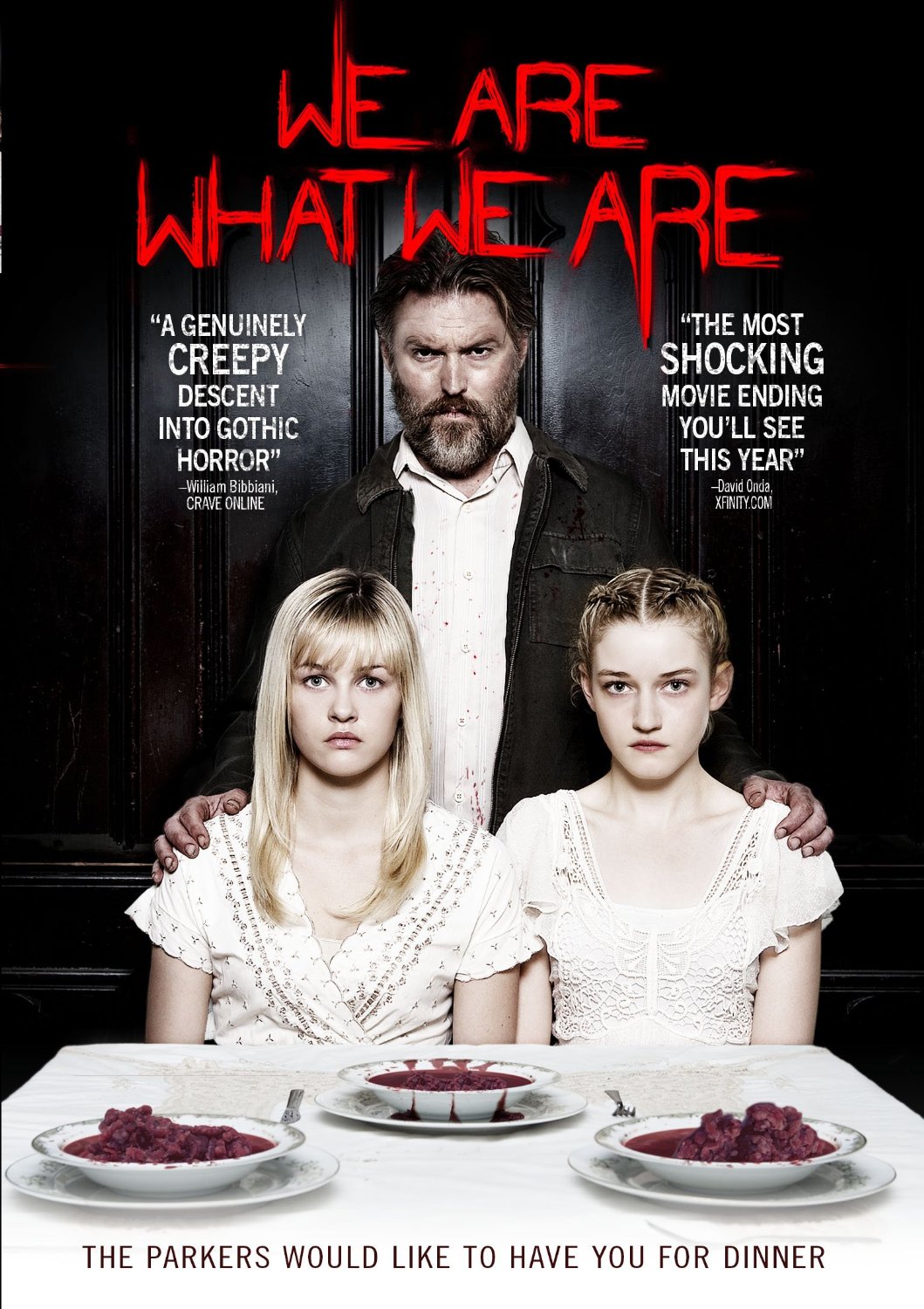 My quest to catch up on as many 2013 horror films that I missed as possible before January comes to an end continued with tonight’s viewing of We Are What We Are, which hit On Demand outlets late last year and was just released onto home video here in the states this week.

A remake of a same-named Mexican flick from 2010, this tale of a family of cannibals is the latest film from Jim Mickle, who released an incredible horror film of his own in the year of the release that this American remake is based on; Stake Land, one of the better vampire films in recent memory.

We Are What We Are centers around the Parker family, whose lives and horrific secrets unravel in the wake of a particularly nasty storm in their small mountain town. By the time the storm clears, the matriarch of the family is dead, a young girl has gone missing and human bones begin to wash ashore. With a cagey old coroner quickly catching on to the family’s secret consumption of meat that you can’t find in the grocery store, the patriarch does his best to protect his two young daughters and even younger son, insisting that they’ll all meet the same fate as their mother, if they don’t continue chowing down on human stew.

While that plot may sound like the makings for a Motel Hell-style horror comedy, We Are What We Are has a lot more in common with a family drama than it does a horror film. Jump scares and buckets of blood are, for the most part, thrown out the window in favor of slow burn storytelling, character development and intense examination of a twisted family dynamic. In other words, what we’ve got on our hands here is a damn fine horror film, as elegant and restrained a way of telling a story about cannibals that the horror genre has perhaps ever seen.

It’s because of the fact that Mickle and Nick Damici’s script is so grounded in realism that We Are What We Are really works, their delicate treatment of the subject matter using the whole people eating people thing as more of a social metaphor, than a gross-out device. Don’t get me wrong, there are plenty of gross-out moments in the film, including a couple scenes of gory carnage that are among the most memorable in 2013 horror cinema, but this is a film that’s about using horror to expose real world issues, rather than one that exists solely to use that horror to shock and disgust. Refreshing, to say the least.

Just as the script is understated and impressive, so too are the performances from the entire cast, which includes Boardwalk Empire‘s Bill Sage as Frank Parker and veteran actor Michael Parks as coroner Doc Barrow. Despite the fact that he never says all that much, Sage is frighteningly convincing as a father who believes that eating young girls is the solution to all of his family’s problems. As for Parks, though his role is a bit smaller than I would’ve liked it to have been, he steals every scene he’s in – as he always does – and turns a small role and a side plot into something so much more. The good vs. evil confrontation the two actors have toward the end of the movie is particularly powerful, playing out like a scene that Quentin Tarantino would’ve written and shot.

I’ve yet to see the original We Are What We Are, so I can’t compare the two films, but what I can say is that this is one American remake that gives all remakes a good name, a fusion of horror and social commentary that tackles ideas of familial commitments, the frightening power of extreme religious beliefs and the way children carry out the behaviors and actions of their parents. While in the wrong hands the use of cannibalism to get across some of these ideas could’ve easily been rendered quite silly, Mickle has proven once again that we’re always in good hands with him. A filmmaker that all horror fans should be keeping a close eye on, that’s for damn sure.